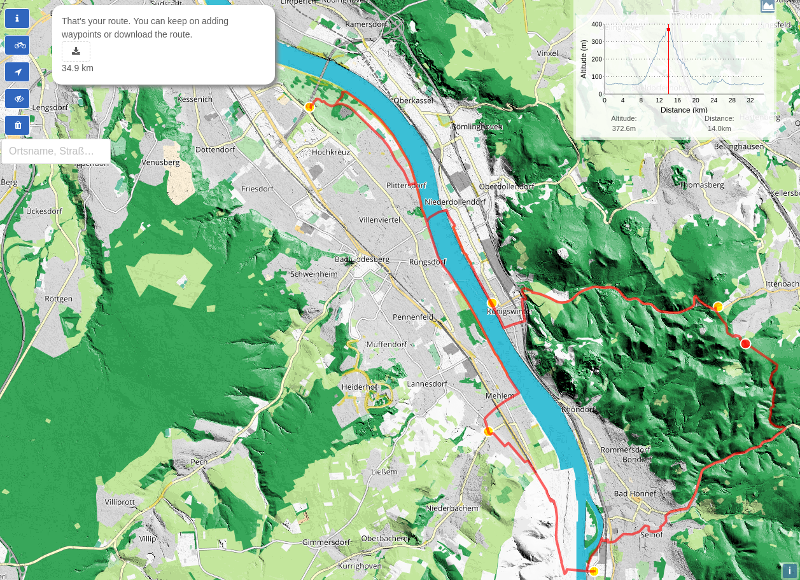 This is what the finished application looks like. With only three clicks (indication of starting point, direction and path length) a finished circular route can be created.

Within the framework of the Master study of Geography at the University of Bonn it is planned to gain practical experience in the 3rd semester depending on interest in business or science. Since I had already worked a lot with Open Source GIS software and tools during my studies and as a student assistant as well as in private projects, the opportunity to deepen and expand my knowledge in the context of an internship at terrestris seemed to me to be extremely promising. terrestris had already attracted my attention as an active company in Bonn through its involvement in the Open Source GIS Community.

The first weeks were determined by the upcoming FOSSGIS conference in Bonn, where users and developers of free and open source GIS software from the German-speaking area come together to exchange about the latest developments and challenges. From the series of terrestris workshops and lectures on various topics from the field of web mapping and geodata management were presented. Since I first became familiar with GeoServer and OGC standards at the beginning of the internship, I was able to help with the design of several workshops.

During the conference, in addition to my work as a conference assistant, I had the opportunity to listen to interesting lectures, which also gave me inspiration for my later internship project. In the breaks and at the social events there was also ample opportunity to exchange ideas with other GIS’learners from application and research.

After I had familiarized myself with the basics and common developer tools, I started my internship project, for which I analyzed and processed free geodata from different sources in the following months and finally merged it into an interactive WebGIS with the help of a variety of open source tools and libraries. After a few detours (e.g. “Büdchentour-Planer”) I came up with the idea of developing a circular route planner for bicycles together with my internship supervisor Daniel Koch.

The initial idea was to develop a map style specifically designed to meet the needs of cyclists. The first step was to import an OpenStreetMap data extract from North Rhine-Westphalia into a PostgreSQL database. In the second step the data was distributed with the help of GeoServer, first as vector tiles, for designing the map style with the Maputnik editor, and then as a WMS service, for integration into WebGIS.

Interoperability is always a challenge when using many different tools. Thanks to many established standards, this is rarely a problem in the GIS area of OGC-compliant software. However, there were some problems when converting the Mapbox GL pen format, which Maputnik uses, to SLD format (OGC standard and used by GeoServer).

After the map style was finished, I worked with different Open Source Routing Services as well as already existing cycle route planners and found two central deficits, from which the ideas for the WebGIS originated in the end. In combination with OpenLayers, Turf.js and the Openrouteservice API, it is possible to quickly and easily create a circular route and then download it in GPX format. In addition, the Digital Terrain Model (DGM1) NRW, which has a height accuracy of +/- 20 cm and is therefore many times more accurate than the standard model (SRMT-1), is used to calculate the height profile. The calculation of the height information runs via actinia, a newly developed cloud geoprocessing service of the partner company mundialis.

The Maputnik Editor has been used to design a map style that takes into account the special needs of cyclists. 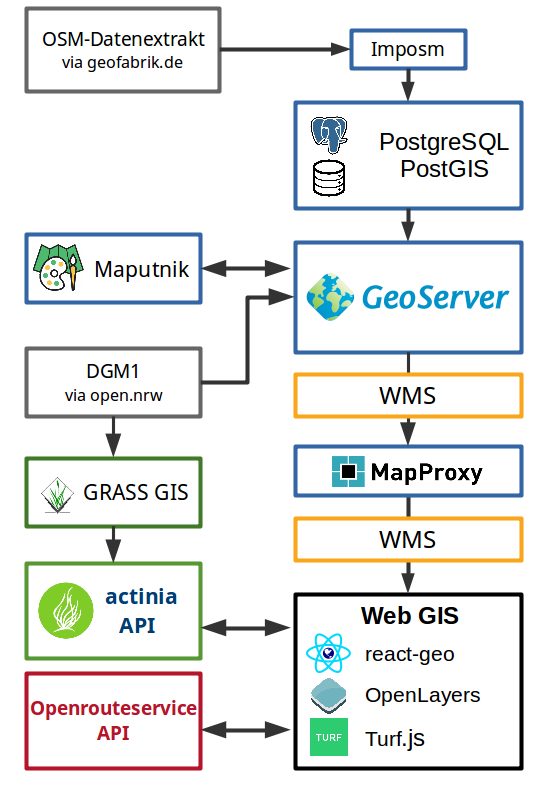 While programming with ES6 (modern JavaScript standard) and especially React.js was still quite bumpy at the beginning of the internship, I quickly gained security through daily learning by doing and a lot of support from the other developers. The WebGIS libraries OpenLayers and Turf.js offer numerous possibilities to process and visualize geodata in the browser. I found the numerous well documented examples as well as the possibility to contact other users or even developers directly via forums and the developer platform GitHub particularly positive. Possible deficits of open source tools can be addressed directly and suggestions for improvement can be made.

During the daily morning meetings and forums I gradually gained an insight into the daily working world and corporate culture of terrestris and its partner company mundialis. After I presented my project to the other employees, many more ideas arose, including the involvement of actinia, a cloud geoprocessing service.

All in all, I enjoyed my time at terrestris very much, which is not only due to the use of innovative and modern open source tools and one of my professional working methods, but of course also due to the relaxed atmosphere, which I was also able to experience at the summer party “Bratwurst, Bier & GIS”. I would like to thank all employees of terrestris and mundialis for the nice internship and look forward to visiting you more often as part of my master thesis!