Last week, on 10 September, the annual global meeting of the Open Geospatial Foundation (OSGeo) Community took place. In regular times this meeting is part of the programme of the annual FOSS4G, but what is normal this year? So there was an online event, which was also simultaneously streamed on YouTube. With this setup the conditions to reach a large circle of participants worldwide was prepared. And indeed, some of the speakers noticed happily their first participation on the the meeting.

The whole range of OSGeo topics were handled, representing the whole heterogenity of our community: After an introductory speech by our President Angelos Tzotsos including a general introduction to OSGeo, figures on members, projects and events, the annual cash report and a report on the work of the Board of Directors followed. Important to mention are certainly the emerging cooperation of OSGeo with ISO/TC 211, the technical committee of ISO, which deals with geographical information and geomatics, as well as the deepening of the existing cooperation with the OGC, which was extended to the support of projects in the OGC certification process.

Afterwards the Organising Committee (BALOC) of the upcoming global FOSS4G in Buenos Aires presented their status on planning. As of today, the conference is planned as a double tracked event, once as an on-site and in parallel as an online event. Of course we all hope that it will be possible to meet again in person in September 2021 and we are keeping our fingers crossed for BALOC! However, the subsequent report on conferences and code sprints was quite frustrating, as most of the planned events could not take place. Saying that, we noticed, that the german-speaking FOSSGIS-Konferenz organized by the german speaking local OSGeo chapter FOSSGIS e.V. seems to be the last onsite event before the lockdown came.Nevertheless, our solution oreintated community organized some online-events, such as the annual Bolsena Code Print, which this year took place from the home desk. We would also like to refer to „de Grote GeoShow“, a monthly online web seminar of the Dutch Local OSGeo Chapter.

Finally, the OSGeo committees, projects and the local chapters themselves presented their activities in the past year. Among the projects, the new project GeoStyler, in which we as terrestris are significantly involved, was presented to the entire community for the first time. 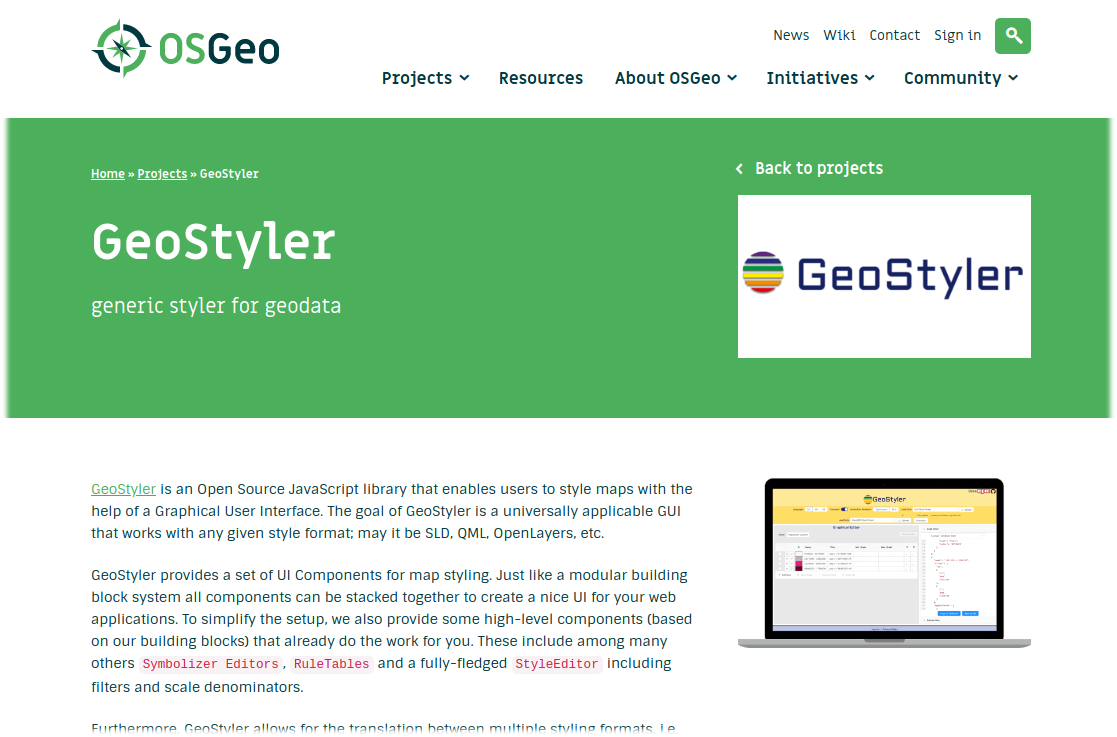 Site of GeoStyler on the OSGeo Webpage

The meeting closed with the announcement of this year’s winner of the Sol Katz Award, an annual award given for outstanding service to our community. This year’s winner is Anita Graser (@underdarkGIS), who performed an outstanding personal service to the QGIS project. We would like to take this opportunity to congratulate her on this well-deserved award! 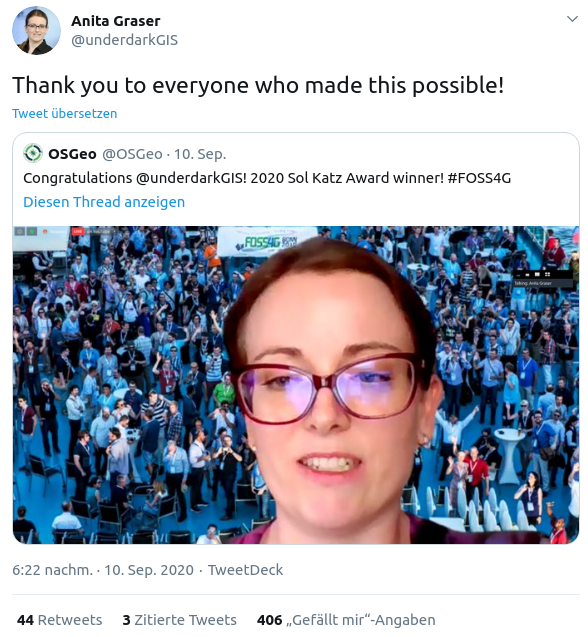 For those who would like to inform themselves about all activities of OSGeo or only about some projects, the OSGeo AGM is a recommended event. All links to the programme and the slides presented as well as to the YouTube channel, with this year’s recording, can be found on the AGM wiki page.

As a conclusion, one can note that one only realises the value of a face-to-face event when one cannot have one due to external circumstances. It remains to be said, however, that easy access via web seminar or live stream will most likely endure, also in order to keep the threshold of participation in this very informative event as low as possible for as many interested people as possible.